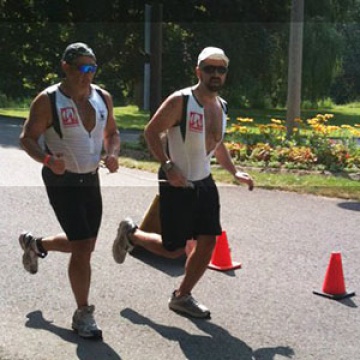 Early in 2004 , I got up at 5:30 am to get ready for work as was the norm. When I looked in the mirror, everything was a blur. I could see my skin colour but could not make out any features. I washed and dressed, and my field of vision just wasn't clearing. What to do?

Once at work, I somehow managed to line up my paperwork and eventually got on the road, but what a tough day. I delivered more packages to wrong places, and had incorrect delivery bills signed more than I ever had.

The next day I brought along my daughter to see for me. We did this for the next 3 weeks or so, during which time I met with an opthomologist who gave me some bad news. I had suffered from glaucoma and my sight wasn't coming back! On August 29, I turned off my van for the last time, and breathed a huge sigh of relief.

I knew I couldn't go back to my job. At 46 my options were limited. When I lost my sight, I was at the stage of life where many middle class people aspire to - a mortgage paid off, a pick up truck, my wife had a car, and we had just put away our first bit of money towards retirement. But all that was about to change.

I felt like I had lost everything - my self-confidence, independence, pride, self-esteem, sense of purpose. I was lonely. I had been the person that people came to for help in solving problems, for financial and employment advice and even for marital advice. I had lost who I was!

At my first pier support meeting, we were asked to tell our names and a bit about ourselves. I couldn't even say my name. I cried. I couldn't get a word out.

On the 3 year anniversary of losing my eyesight, I signed up for an adult blind camp which was taking place that August. I just wanted to talk to someone else who was living with vision loss. During that week I made a lot of great new friends and participated in social activities and sports for the first time in a long while.

Shortly after arriving home, I was invited to a triathlon training camp for visually impaired athletes in Muscoka. Although I had no background in triathlon, I decided to give it a try. A friend I had met at the blind camp came with me and after returning from the camp, we were given a training program to follow over the winter to prepare for our first triathlon that summer.

This opportunity, I like to say was the beginning of the next part of my life. I have continued to participate in triathlon. Our national team for athletes who are blind and visually impaired is called Won with One. We continue to support each other and through the program, I have travelled to places like New York City , where I would never otherwise have gone.

I'm also involved in many ways advocating for the blind and visually impaired. I can call myself a Chairperson, board member, multiple committee member, speaker, and the all important, peer mentor.