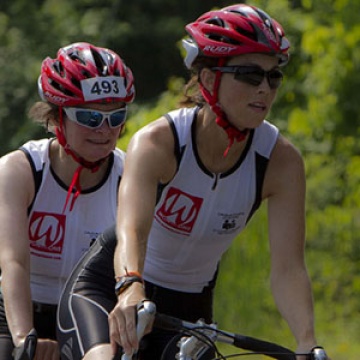 We’ve come a long way in enabling blind and visually-impaired people to take advantage of the physical, mental and social benefits of leading an active life. New technologies, programs and attitudes have helped people with disabilities to take their place among their friends, families and the community.

When I was growing up in the 1960s and 70s, many thought that it was too dangerous for children with low vision to participate in sports; we could get hurt, hurt others and insurance costs would skyrocket! My parents felt differently, encouraging me to be active. While they had difficulty enrolling me in sports programs, they raised me on sheer common sense, finding great outlets for their very high-spirited, energetic daughter. Adapted swimming, skiing and horseback riding were available here in Ottawa, and I took advantage of each one.

As I grew, the backward thinking around the participation of people with visual impairments in physical activity changed. In 1990, I joined the Canadian National Institute for the Blind’s aerobics program. I was hooked! Unfortunately our instructor moved away and the class was discontinued.

Undaunted, I started participating in ‘regular’ fitness classes at my local Recreation Centre. Since then, I’ve done Step, Strength Mix, Spinning and various cardio classes. The accommodations which enable me to participate include standing behind the instructor and getting extra verbal cues.

In 1994 on a sisterly dare, I began participating in the CN Tower Stair Climb, a mad dash up the tower’s 1,776 steps. Along with fund-raising for various charities, the goal is to reach the top in a respectable time. Later, another sisterly dare got me interested in running—this former ‘non-runner’ began with a 5K run in 2008. With the help of sighted guides, I’ve now completed several 5- and 10K events. My father is a former marathoner and my sister has two marathons under her race belt—why should I be left out?

In 2010 I was invited to join Won With One, a national blind triathlon team. The experience has been life-changing! Thanks to the support of guides, we swim, bike and run alongside our sighted competitors. I owe a great deal of gratitude to all of those wonderful people who support us.

There will always be certain challenges for me as a visually impaired athlete; however, they can be overcome. A fellow blind triathlete devised a treadmill tether—a belt with strings and clips that keeps me in place on the treadmill. Talking software and a shoe-borne device that links with my iPod provides a verbal readout during treadmill runs. Friends have explained how to carry water in a camel pack while cycling as room for water bottles is scarce on a tandem bike. There are an increasing number of fitness classes for participants with limitations. Along with integrated classes, I attend a total body workout and yoga class for blind/visually-impaired people at a local community centre.

People with disabilities must adopt a creative, collaborative team approach to become physically active. Like people who require a special diet must plan ahead, we too must plan ahead. Before going to a fitness facility, check out their programs and prices. Talk to their staff and go on a tour. Be honest when discussing your needs, and work together to make accommodations.

“Health is not a default”, a phrase from the show Village on a Diet, represents the movement to a healthier lifestyle. Today more than ever, there are opportunities for anyone to lead active, healthy lives. With a little creativity and forethought we can each join the movement.