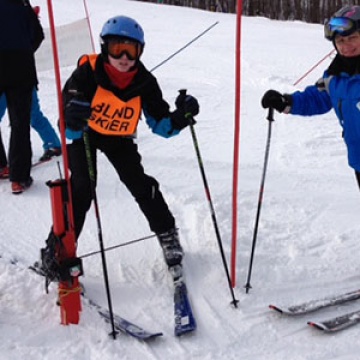 Welcome To My World

My name is Karen Ide. I am a volunteer Special Olympics alpine ski coach at Blue Mountain, Ontario. I have been coaching for 16 years and know many athletes with disabilities. One in particular stands out from our team. She is one of the athletes that I coach, and her name is Robin Shuter.

Robin is 24 years old. She has an intellectual disability and albinism. She is also legally blind, but can see enough to follow me closely while ski racing. She is a very keen participant in all aspects of life, including fitness. She’s in great shape and often conducts our team “warm up” exercise sessions before we go skiing. One of Robin's best qualities is her wonderful public speaking ability, and clear and easily audible voice projection!

Robin lost her beautiful mother, who was a close friend of mine, to cancer only a couple of years ago at the young age of 52. Robin spoke at her funeral to everyone’s amazement. She gave us all goose bumps!!! Robin promised her Mom that she would win a medal in her next race in her honor, and she did!

Robin has been living independently in her first apartment for the past few years. She loves it. She works three or four days a week bussing tables in a lovely restaurant in the Intrawest Village at Blue Mountain, where they love her work.

Robin puts 100% effort into everything she does. She exemplifies how an active lifestyle can enrich the life of someone who never lets their disability stand in their way. Ski racing is a passion for Robin. She listens to her coach and works hard to improve her race times. In the past, Robin has been selected to travel to both Provincials and Nationals, and is hoping to make it to the next World Games.

One day while we were training, the visibility was almost zero because of thick fog. Most of the team headed for the lodge out of fear. Robin was keen to keep going however and was amused at the thought. Later, as she entered the lodge, she listened to her fellow team mates as they complained how hard it was to see. She simply remarked, “Welcome to MY world”! We all smiled as we realized how amazing Robin is, and we never complained about fog again!

Thank you Robin for being the best “you” that you can be!