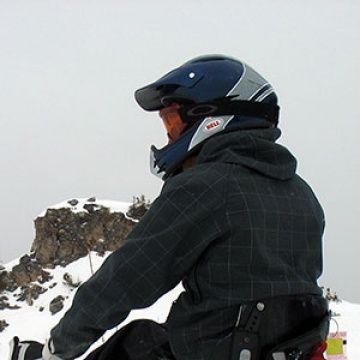 No Mountain Is Too High

My name is Micheal Alexander and I live in Golden B.C. Mine is a unique story. In 1994 I began designing and building sporting equipment for people with mobility challenges. I am a welder by trade. My first product was the F1 sit-ski, which allows people without the use of their legs to enjoy downhill skiing. The F1 has been called the Ferrari of sit-skis and has been used in several Paralympics, garnering multiple Gold medals for several athletes around the world. In 2002 I built a prototype four wheel mountain bike, again for people who are unable to balance or pedal a two wheeler. I tested it myself for two years, riding some very serious terrain and improving the design.

In May of 2004 while riding with some friends and my girlfriend on mount 7 here in Golden, I decided not to use the brakes when I probably should have. The result was a horrific Nasser style crash, end over end and round and round, that left me laying on the ground with a spinal cord injury at CO-5. Kind of ironic I've been told.

The good news is that having worked with so many athletes with spinal cord injuries over the years, I knew that anything was possible. So after a couple of years of rehab and getting some strength back I began driving again, wow what an incredible sense of freedom that brings you! About a year later, a friend who is a paragliding instructor asked me if I wanted to go paragliding off Mount 7, which is one of the best places to go paragliding in North America. Always being up for an adventure I said sure let's do it! We decided the safest way to take off and land would be to use my four wheel bike and do a tandem flight. This had never been done before. Well to make a long story short, we had a perfect take off, flight and most importantly a text book landing.

Winters here are long and snowy so I decided, with a little help from my friends, to build a sit-ski that I could use. Since I don't really have any core strength, I designed a sit-ski with two skis that articulate, complete with handles which I could use for leverage. Our local ski hill is Kicking Horse Mountain Resort, a very serious ski hill with just a tiny amount of beginner terrain. We managed a short run on the chair lift, then in the gondola for a ride to the top. It all worked perfectly and I had an amazing day. I now have something to look forward to in the snowy months!

My newest projects are a scooter which needed some modifications, and a kayak which we just finished making pontoon style outriggers for. Hopefully these outriggers will keep me from flipping over, again.

I am working very hard at having an active lifestyle again. It's not always easy, but it sure is fun. I'm also able to teach some of my friends some new skills as I enlist their able hands. Strangers in my town have told me that I inspire them, that's not necessarily my goal but I'm happy if I can motivate others to lead an active adventurous life.