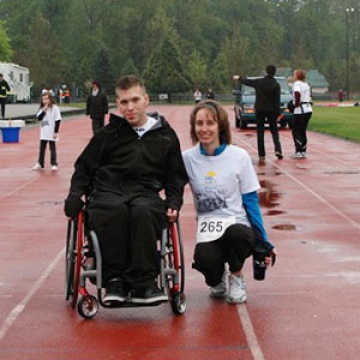 No Goal Is Out Of Reach

My name is Marco Giovanni Pasqua and I was born on July 4, 1985, in Vancouver, British Columbia. This date was the beginning of my fight for a “normal” life. I only weighed 2 lbs 10 oz at birth and was 3 months premature. My parents would later find out that I was also born with Cerebral Palsy (Spastic Diplegia).

Despite facing adversity and having to endure 13 surgeries as a child, my parents raised me to believe that no goal was too out of reach, and no challenge was too hard to conquer. They enrolled me in horseback riding when I was only 3 and a half years old in hopes that it would build my strength and confidence. I excelled at sports quite quickly which allowed me the great opportunity to compete in the BC Summer and Winter Games for Athletes with Disabilities. Since 1994, I have won 22 Gold, 10 Silver and 2 Bronze Medals in Track and Field, Swimming, Horseback Riding and Basketball. When I was 10 years old, I was given my first opportunity to speak in front of a large audience when I was chosen to be the ambassador/host alongside TV and Radio personality Red Robinson for the Tim Hortons Christmas Telethon. It was then that I realized the impact that words can have.

With the drive and positive attitude that I gained from these experiences, and through leading an active lifestyle, I was led to the Art Institute of Vancouver to study for an associate’s degree in fine arts and game design. In March 2006, I graduated from this program on the Dean’s Honour List. I then spent 4 years in a leadership position in the Video Game Industry. Throughout my time in the game industry, I recognized the constant challenges and stress that my co-workers and I were undergoing. I developed a system called ‘The CUBE Principle’ to make daily processes easier by delegating certain tasks and utilizing the perspectives of peers to get the greatest results.

I have now left the gaming world to pursue my true passion of being a professional speaker. With the advice I’ve received from icons like Red Robinson and Gene Simmons, nothing is going to stop me in pursuit of this dream. In February 2012, I was fortunate to be named Valedictorian of my business development class for starting my own company, Marco Pasqua Enterprises.

I’m motivated in life because I’ve seen firsthand the power that a positive outlook can have on changing the perceptions of others. I may not be as physically able as some individuals, but I have been given a voice and it is my intention to use it. I now utilize my stories of struggle and success to provide practical tools that will create action immediately to light a fire in employees and students everywhere and “level up their life”.