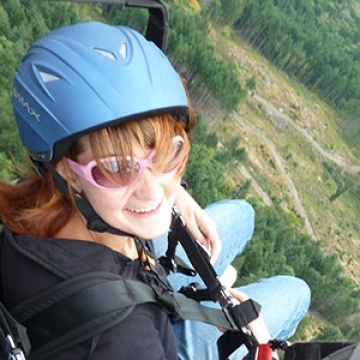 Active Living Is For Everyone

For me, active living has become a part of my lifestyle. Of course, this did not just happen, and I did not expect it to happen at all. Active living, I thought, was something for athletes who played sports. Growing up partially-sighted, I was not highly involved in the sports that were available to me at the time, especially since balls seemed to be invisible until they reached my face (at which point it was too late to avoid being hit).

The physical activity opportunities available to me seemed to involve too much risk. Aside from the risk of physical injury, I was also intimidated by the risk of ridicule from peers who did not understand or realize I had a disability, and who were never taught about inclusiveness. So I found other ways to enjoy myself, which did not seem to entail as much risk. This was okay for a while, but I did feel like there was something missing, and I now see that being active was part of what I missed.

For me, the first step to leading an active lifestyle was attitude. I needed to realize that active living does make a difference and that it is for everyone. I needed to see that being active wasn’t just about playing a sport or being a high-end athlete; it was about being active everyday, whatever that might involve. I learned these lessons through experience and the people around me.

One example of an attitude of inclusion happened while I was living in the Netherlands. A group from the community I was living in got together for ‘sports night’ on Friday. Normally I would just stay home and do something else, but one Friday some friends convinced me that I should come. They had an idea. Since I couldn’t see the soccer ball very well, they decided to make things more fair by having all the players wear cups on their faces, with the bottoms cut out. We played the most fun game of soccer ever, and laughed the night away. It was just plastic cups and string, but it meant so much more to me. These people exemplified an inclusive attitude. I did not ask to be included, but they saw that I was excluded and used imagination and creativity to make me feel a part of the game.

Sometimes as people facilitating activities we need to ask, who is missing? Why are they missing? How can we adapt the activity to ensure that everyone feels welcome? Discovering the answer to this last question may require creativity and effort, but the solutions will enrich the experience for everyone.

Active living is not just about physical activity. For me, feeling better physically is part of the benefit, but so is increased confidence and a greater sense of social connection. As I have become more active in my everyday life, I have become open to new experiences and people, which in turn has led me on new and exciting paths. Who knew that just starting on the journey of physical activity could make such a difference?