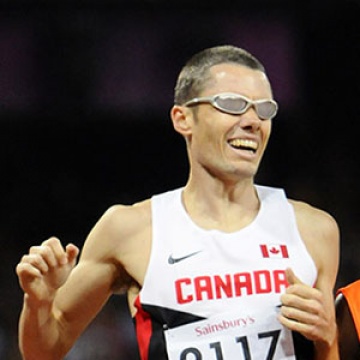 In December 2012, a friend gave me some good advice. In an email he wrote that even though the future held uncertainty, I could be sure of one thing: running is forever.

At the time, my wife Colleen had just begun dialysis treatments, having first learned she had kidney disease in 2008. I was undergoing tests to determine if I could donate one of my kidneys to her.

Three months earlier, we had been in London where I represented Canada at the Paralympics along with guide runner Josh Karanja. Josh and I placed third in the 1500 metre track event for blind runners, and won silver in the 5000 metres. For Josh and I, standing together on the medal podium felt like vindication for everything and everyone who had helped make this moment possible. It might have been enough to call it a career at the age of 35 with four Paralympics behind me, or conversely, fuel to keep the fire burning even brighter.

I grew up in Northern Ireland with two younger brothers, also blind due to a congenital eye condition. Our parents didn't shelter us from playing outside, just like other kids in our neighbourhood. I remember that most of the kids looked out for us and set up games so that we could play too. We adapted soccer by tying a plastic bag around the ball so we could hear it. We couldn't get enough of this game.

My family immigrated to Canada in 1991, settling in Hamilton. It was in high school where I started to get more serious about competitive running due to the encouragement of one or two teachers. When I arrived at the University of Guelph in 1997, no one knew how a blind runner would be able to train. By sheer fluke, I found myself at the university with the top varsity team in Canada. Over time, with the support of the coach and team members who often guided me in workouts, I became fitter and faster, qualifying for my first national Para athletics team in 1998. I have never looked back.

Running has impacted me in so many important ways. It has challenged me, been a healthy outlet, taught me valuable lessons and introduced me to many amazing people.

On March 7 2013, I became a kidney donor, undergoing successful transplant surgery with Colleen. Within a few days, we were back home and on the road to recovery. The surgeon had prescribed no running or strenuous physical activity for six weeks post surgery. We did many walks outside and on our treadmill at home. For the first time in many years, I was not thinking about running. And strangely, I was at peace with it. We continued to walk daily. It felt good to move, for its own sake. Over the weeks, we became stronger.

Seven weeks after our surgery, Colleen is feeling great. Last week I received the go-ahead to begin jogging. I don't know what the future will hold or whether it will be possible to reach the competitive level I was at previously. Though I will give it my best effort, I've realized that it doesn't matter in the way it did before, when weighed against the health of those closest to you. Running will always be there. I've come to understand that my friend was right - running is forever.